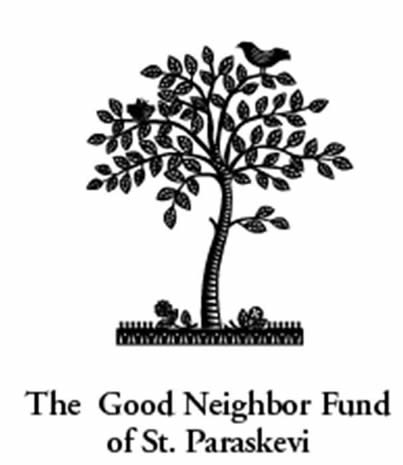 How many times have we opened the paper and read about a single parent who has to care for a terminally ill child or a cancer patient in need of a bone marrow treatment that’s not covered by insurance?  We’ve seen the stories, and our conscience has called upon us to help, but we don’t always know what to do.

The Good Neighbor Fund was formed in 2009 to serve as the collective conscience of St. Paraskevi Greek Orthodox Church, Greenlawn, NY. GNF provides assistance to those experiencing difficult times, both in our parish as well as in our greater community.  We work with local agencies, community leaders and hospitals such as National Philoptochos, Family Service League, Visiting Nurse Service, North Shore and Stony Brook University Hospitals; often acting as a “bridge” toward financial or physical recovery, or as a catalyst that prompts other organizations and individuals to help.  Largely through fundraisers like this, we’ve raised more than $150,000 and have helped individuals and families with an average financial contribution of about $1500.  This may not seem like a significant amount, but the impact of these gifts on the lives of the recipients has been enormous.  We’d like to share with you a sampling of the individual stories of those we have helped.

These are just a few of the stories.  There are countless others like these that truly tug at our hearts and minds. The Good Neighbor Fund is committed to being there for them.  And with your continued support, we will be.  Thank you!